What Drones Does Amazon Use?

Amazon Prime Air is just a delivery system that use small drones (miniature UAV) vehicles for safely delivering packages to customers in 30 minutes or less within a 10mi (16km) radius . Amazon produces its own drones. In December, 2013, Jeff Bezos the CEO of Amazon, introduced plans for Amazon Prime Air. Amazon has been testing the Prime Air delivery drones for decades now.

Amazon Prime Air is using multi-rotor miniature unmanned aerial vehicle (miniature UAV) technology to autonomously fly and deliver individual packages to customers within thirty minutes of ordering. The rules they set is that the order should be less than 5 lbs (2. 25kg) to qualify for 30 minutes delivery. Also it must be small enough to fit right in the cargo box that the craft will carry, and must have a delivery location within a 10-mile (16 km) radius of a participating Amazon order fulfillment center. In future Amazon plan to fly drones weighing an as much as 55 lb (25 kg) within a 10 mi (16 km) radius of its warehouses, at speeds as high as 50 mph (80. 5 km/h).

Moments after receiving the order an electrically-powered Amazon drone makes its way down an automated track and then rises to the sky with the customer’s package on bord. Cruising quietly below 400ft, carrying packages up to 5lbs (2. 25 kg) and guided by GPS. Amazon systems are designed to find their destinations safely. The consumer must receive his package within half an hour of he place the order. Amazon is using the data gathered during this beta test, and the feedback provided by customers, to expand the private trial to more customers as time passes.

The sky’s the limit for Amazon’s flying warehouses. Amazon’s airborne fulfilment centers would hover at an altitude of 45, 000 feet (13, 7km) and start to become the focal point of a network of unmanned aerial vehicles. The self-driving airships will carry a cargo of Amazon products and unmanned drones to deliver goods to customers.

Drones would navigate horizontally to their destination and would use little to no power. What is meant to is that airships which can be in the air be replenished by smaller USV that could carry potential workers, fuel and inventory.

What is now awaiting is the federal approval for USA, because the amazon performed an effective testing the delivery by the drones in the UK.

Amazon started a new private trial for customers in the Cambridge area of England, and on December 7th 2017 they completed their first delivery! What amazon has offered to his customers is to pick from a selection of thousands items, which can be delivered to their homes. We will see how this may develop in the near future, but it looks promising. 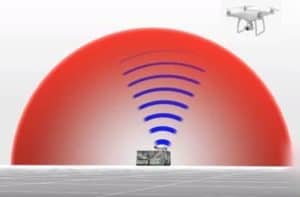